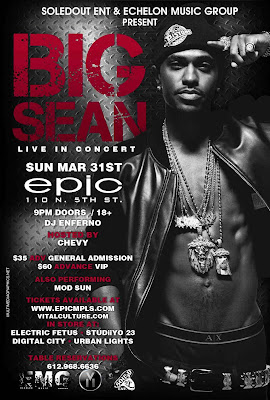 WHO:
Sean Anderson, aka Big Sean is the newest artist signed to G.O.O.D Music/Island Def Jam.  Sean was raised on the west side of Detroit by his mother and grandparents who instilled in him the principles of hard work and determination. Sean attended the Detroit Waldorf School from Kindergarten to 8th grade where he was introduced to a wide spectrum of arts and culture. He later attended Cass Technical High School where he furthered his music career, met life long friends and gained the support of fans and peers as he independently sold copies of his music. Sean gained a strong relationship with 102.7 FM, a local radio station in Detroit where he displayed his rhyming skills weekly. There, he met Kanye West after a radio interview in 2005 and got a chance to display his talent by freestyling for Mr. West, giving him a copy of his music and sending numerous tracks for him to critique. After months of submitting songs and many meetings, Sean finally got the call from Kanye West saying he wanted to sign him. Big Sean officially signed to G.O.O.D Music in 2007 and then signed to Island Def Jam in 2008. Sean has two mix tapes under his belt starting with "Finally Famous - The Mixtape" (Nov 2007) and "U Know Big Sean - Finally Famous Vol 2" (Nov 2008). His hit single "Getcha Some" took over the airwaves and created major buzz for the artist and quickly solidified him as a breakout star. The single first debuted on Kanye West's "Can't Tell Me Nothin' Mixtape" giving him the exposure needed to showcase and introduce his talent to the world. Big Sean release his debut album "Finally Famous" in Spring 2009. The album features hip-hop stars such as 10+ time Grammy-Award winning artist Kanye West, Pharell, The Dream and many more.