Blog Of The Day: Ricky Gervais: This Side Of The Truth 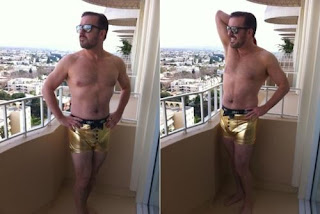 I love Ricky Gervais. So, I'm happy to report that I just discovered his blog - and just like everything else he does (The Ricky Gervais Show, The Office, Awards Hosting, etc), it's hilarious. This little exchange he wrote for James Franco and Anne Hathaway as Oscar hosts is amazing:
http://www.rickygervais.com/thissideofthetruth.php

JF
It's a daunting task hosting The Oscars but we're not alone. Presenting awards tonight will be a string of Hollywood legends and some other actors who have a film out in March or April.

JF
Usually they hire comedians to host The Oscars, but tonight, instead, you get us!

AH
No comedians tonight. And do you know why? Because comics are ugly.

JF
Especially that rude obnoxious one who played the Steve Carell part in the English remake of The Office.

AH
But you can all relax because Ricky Gervais is in London...

He's doing some charity work.
Yeah, he's visiting orphans with cancer.
He's telling them what bald little losers they are...

Thank you.
No rudeness tonight.
It's going to be a night of the most privileged people in the world being told how brilliant they are and thanking God for loving them more than ugly poor foreigners.

That's not to say that we don't care. No, apart from all the great movies we made this year we continued our life-saving philanthropy. Mega stars like Angelina Jolie, George Clooney and Ben Stiller brought light to third world poverty and famine and shocked the world with visions of children so hungry they'd been living off dead beetles all their lives.

AH
Yeah and Yoko Ono said. "What's wrong with that?"

JF
Oh Anne you are naughty. In a respectful, wholesome way.

That Ricky Gervais should do more for charity.

Ricky Gervais is now worth $80,000,000. The obnoxious Brit confirmed the figure, adding,"Yes and my dentist hasn't seen a penny."

AH
Yeah, why doesn't he get his teeth straightened and bleached like everyone else in Hollywood?

JF
It's a good question Anne. For the same reason he doesn't have botox or suck up to important producers - there's something wrong with him.

AH
There must be. Why isn't the stocky, fangy, little slob more like us, right?

JF
That ugly dude needs to get a Hollywood makeover, big time.

AH
Quite. And even though most of the actresses here have eating disorders, that's better than being fat right?

JF
You bet it is gorgeous.

AH
You are so handsome.