It's A Small World After All. 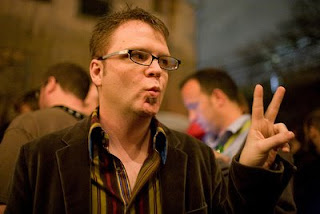 The things you learn from the NY Observer. This story is crazy - and according to City Pages, largely inaccurate. Rex Sorgatz clears things up here.

I met Rex in Minneapolis a few years ago and we wound up partnering on the T-Shirt series the article mentions: his "A Prairie Ho Companion" and "S'uptown" shirts and the "belinda jensen is not a celebrity," "spooning alone," and "chomsky's dope" tees powered by VimLab. We sold them on his site - MNSpeak and in boutiques around Minneapolis. When all the Garrison Keilor hoopla was going on, "The Daily Show" called and asked him to be a guest - but he would only agree if Garrison would go on as well. Fat chance. Anyhoo, Rex is a really cool guy and I had no idea he had become such a huge part of the blogging literati of NYC over the last couple of years. He hosted a party in the Rockstar Suite of Chambers Hotel last summer when he was home for a visit and I found myself mingling with all sorts of Minneapolis hipsters, club owners and writers.

But my favorite Rex story is that Jeff and I were at a party on the patio of his Pillsbury mansion condo one warm night in July of 2005, and a guy came up and asked me "Have you ever thrown a really great party?" I was fairly buzzed and found it amazing he had asked me that particular question since throwing parties is what I do for a living - and told him so. We chatted for a while and learned he was an actor in town to play the lead in a production of "Entertaining Mr. Sloane" at The Jungle Theater, which we went to see - it was fantastic. In the Playbill I learned his name was Justin Kirk, he had been nominated for an Emmy for his work in "Angels in America" and was starting out on a little Showtime program called "Weeds." Now he cracks me up as El Andy, aka Andy Botwin on "Weeds" - one of my favorite shows and recent addictions. Small world.